Senior most Gauhati High Court judge Justice Tinlianthang Vaiphei will take over as the Chief Justice on October 21. Assam Governor PB Acharya will administer Vaiphei the oath of office and secrecy at a function in the Raj Bhawan on that day.

President Pranab Mukherjee appointed him to replace acting Chief Justice Kazarian Srecdhar Rao who is retiring on that day.

Congrats Vaiphei sir for your

Permalink Submitted by SANDEEP LANGTHASA on Fri, 16/10/2015 - 23:49
Congrats Vaiphei sir for your achievement.

ALA speaker asks police to take up FIR

7 Jul 2012 - 3:03am | editor
Assam Assembly Speaker Pranab Gogoi on Friday ordered police to take up the complaint lodged against MLA Rumi Nath and her second husband who illegally entered his residence and assaulted visitors on... 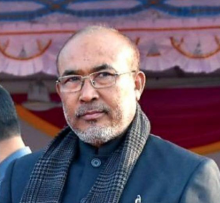 18 Jun 2020 - 10:14am | AT News Imphal
Imphal: In a high voltage drama, at least 9 legislators have pulled out of the BJP-led coalition putting CM NBiren Singh in dire trouble. The drama began as soon as 3 BJP MLAs quit  the party...