Speaking on the ocassion the Congress leaders  urged the tea tribe community to vote for the Congress in the coming Assembly election. They said that Congress have been providing  the Tea tribe community with many welfare schemes and there by helping their community. The leaders also said that BPF would have a hard time in the three assembly constituencies of Udalguri district namely Udalguri,Mazbat and Paneri. In the new District committee Sanjit Tanti was made the President while Simon Nag was made the Secretary, Bimon Mahato was made the General Secretary. The meeting came to an end with the vote of thanks offered by Santius Kujur Rajya Sabha MP of state. 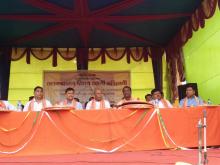 21 Sep 2017 - 8:28am | AT Kokrajhar Bureau
ULFA general secretary Anup Chetiya has urged the government to ensure safety and security of the indigenous people in the state. Addressing a public convention in Kojrajhar on Wednesday, the former...

15 Dec 2013 - 9:31am | Rangman Das
A semnar titled India: The Way Forward  was held at Guwahati recently. The event emphasised the need to look at the way forward for India on all aspects that will take the nation ahead with the...

15 May 2008 - 3:07am | editor
Assam Chief Minister Tarun Gogoi is leaving for China on a seven-day official visit with a view to boosting commercial ties with the neighbouring country. According to information, Gogoi is set to...