9 nominations in the Paneri LAC

Preparatory activities have nearly been completed in 64 Paneri LAC in Bhergaon sub-division for holding Assembly Poll on April 4. District Election Office has nearly completed various pre poll activities.As per latest update there are total 132,482 voters (male 68244 and female 64238) in the LAC. The number of new voter is 6544 (male 2995 and female 3549).650 numbers of voters have expired and 282 have been shifted to other places.The number of D voter is 3174. There are 164 polling stations in Paneri Assembly constituency out of which 28 polling stations have been identified as hyper sensitive,63 as sensitive and 73 as comparatively safer.Training for polling personnel, sector officer,zonal officer etc for the conduct of the Assembly Poll 2016 have started from March 13.First phase of training was held at Tangla HSS on March 13. Thge second phase will be held at same venue on March 21 while thgird and fourth phase of training for 64 Paneri LAC will be held at Udalguri College on March 26 and 29 respectively.Dimple Baruah, Asstt.Commissioner and In-Charge Media Cell, Udalguri district told that voters awareness programme under SVEEP have been on at various places in 64 Paneri LAC. Awareness Rally and Signature Campaign were launched at Paneri and Tangla town on February 23 and 29 respectively.Street Play in Assamese Bodo and Adivasi language were performed at various places in the LAC. Second phase of the awareness campaign in the LAC have been launched from March 5 and will continue till March 20. She said that installations of large hydrogen balloons with slogans have also been installed at several places and street plays were arranged in Adivasi villages at Majuli,Hatigarh and Khoirabari.Other awareness programmes launched includes distribution of CDs and T-Shirts,installations of digital signboards etc. “On the third phase from March 21 to March 30,Celebrity Campaign for specially abled persons, pregnant women; distribution of invitation letters to guardians through school children,Bulk Messages to people etc will be launched',she said.Already six candidates namely Durga Das Boro (Congress),Kamali Basumatari (BPF),Nanda Ram Boro (UPP),Swarna Lata Chaliha (SUCI)Prabhat Das Panika (Ind), Dina Nath Das (Ind),Mahesh Chandra Sarmah (Ind),Sudhandu Mohan Talukdar (Ind)and Bikon Chandra Deka (Ind) have filed their nomination papers before the Returning Officer of 64 Paneri LAC at Udalguri.

A rare show of portraits in the city

26 Sep 2016 - 6:41am | AT News
An exhibition of portraits of many distinguished personalities in water colour at State Art Gallery Guwahati attracted the attention of art connoisseurs on Sunday. Organized by Tinsukia Durgabari...

13 Aug 2009 - 11:16am | Juthika Das
All Assam Karmachari Parishad protest against the enhancement of the Bhaskar Barua-led Assam Salary Commission for the second time. Protesting against the failure of the Commission and for the... 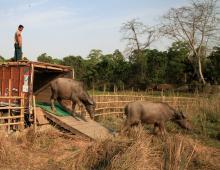