The All Assam Ex-Ulfa Co-ordination Committee Udalguri district committee through a press statement has urged all its members hailing from Udalguri district associated with the organization to boycott the general meeting organized by All Assam Ex-Ulfa Aikhya Mancha Udalguri district committee at Tangla scheduled on April 29 next .As under the aegis of The All Assam Ex-Ulfa Co-ordination Committee the government has already initiated steps for rehabilitation of the surrendered militants. The President and Secretary of the organization also clearly states that if any of its members defies and takes part in the meeting disciplinary action would be taken against them and the committee would in no way be responsible for that. 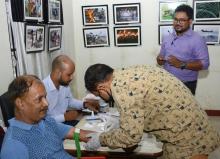 10 Sep 2019 - 2:20pm | AT News
Guwahati: City-based scribes, who participated in a daylong Hepatitis B and C screening camp at Guwahati Press Club on 9 September 2019, showed an excellent health status as none was reported...

29 Sep 2017 - 2:08pm | Dibya J Borthakur
One person died another sustained serious injury when the bike which they were riding on collided on a truck from the backside in Nagaon district on Friday.  The incident took place early...