Interacting with the NPF representatives at his Official Chamber, Civil Secretariat, Zeliang expressed his gratefulness stating that their support during this crucial period was highly appreciated. While highlighting the political episode that had recently occurred, Zeliang reiterated that the voice of the majority always prevails in a democracy and expressed his gratefulness that it was the voice of the majority MLAs that had made him the Chief Minister today.

Zeliang said that it was not within the power of any individual to make changes in regard to the same, without the prior approval of the Central Executive Council (CEC) at a General Party Convention.

Changing the Constitution of the NPF Party and creating law and order problem after being politically and legally defeated is uncalled for.

Also calling upon all rank and file of the NPF Party to uphold the true spirit of the Party, Zeliang expressed confidence that the NPF Party would soon be restored back to its deserving position as aspired by the majority.

9 Jan 2008 - 8:38am | editor
Rigging and booth capturing is reported in many places of Assam in the third phase of pnachayat polls which is going on. According to information, a booth capturing incident rocked Morigaon district... 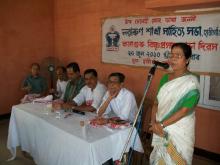 11 Nov 2016 - 7:51pm | AT News
A Swachch Abhijan drive was carried out at Banglabari Ashurline along the Banglabari Tea Estate today in Kokrajhar district. Over 200 villagers from grater Banglabari area participated the swachch...