LAKHIMPUR: Assam education minister Himanta Biswa Sarma claimed to have brought a sea change in the education sector. But his “sea change” is confined to areas only. Many areas are still lagging behind with schools functioning with one teacher to look after six classes.

Come to the No 2 Khalihamari LP School in Narayanpur block in Lakhimpur district where only a teacher has been looking after six classes for the last 7 months. He has been taking care of the students after his sole colleague was transferred.

Despite repeated requests by the local residents the new teacher has yet to be restored much to the major inconvenience of the students and their guardians.

Notably, the school scored A+ grade in the last 'Gunutsav'. Major inconvenience is in sight at a time when the students are appearing in the annual examination.

29 Jul 2013 - 12:24pm | Peter Alex Todd
The Congress has been all along using the Muslims for their political benefit, and that the Muslim community of the country has gradually understood this fact said, the BJP Minority Morcha National...

19 Feb 2009 - 9:26pm | editor
The new Bangladesh government seems to have reached an understanding to handover ULFA top gun Anup Chetia, who has been languishing in Dhaka jail since 1996.This was disclosed by Bangladesh's... 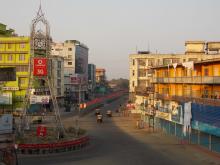