Pulsating music, hot contestants in shimmering gowns, elegant, dazzling sarees, and casual wear, and a mindblowing performance by Sourabhee Debbarma, the latest star of Indian Idol, set the packed crowd at Pragjyoti ITA, Machkhowa on fire on October 10. The second edition of The Eclectic Model Hunt, organised by The Eclectic and sponsored by Ponds White Beauty, the number one magazine from Northeast India kicked off to a roaring start with the lighting of the ceremonial lamp by T.G. Baruah, chairman of The Assam Tribune Group of Newspapers.

The Eclectic Model Hunt is an attempt to offer a platform to showcase aspiring young talents who can carve a name for themselves in the world of modelling. As MC D'Com Bhuyan and co-anchor Pomi Baruah took the stage, an air of expectancy was palpable in the audience, waiting to witness the model hunt. The tone was set by a beautiful dance recital of Mahaganapati Vandana performed by the students of Indira P.P.Bora.

With an audio-visual introduction, and to the accompaniment of lovely music, one by one the eighteen contestants walked the ramp in the four rounds displaying outfits created by well known designer Payal Chaddha of Gallery 2000, and the Cocktail Brand. The evening witnessed enthralling performances by reknowned flautist Deepak Sharma and the Band of Brothers, members of the band Moonwind.

Earlier, the managing editor of The Eclectic magazine, Tanushree Hazarika welcomed the gathering.

The glittering event was attended by a host of dignitaries. The winner of the model hunt was crowned by Parama Hazarika, chairman, The Eclectic group. 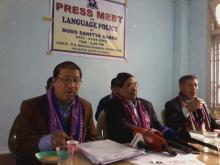 29 May 2014 - 10:10pm | AT News
Advocate General Amrit Phukan has put in his papers on Thursday. According to sources, the senior lawyer has sent his resignation letter to the authority which was accepted fortwith. The government...

6 Oct 2009 - 11:26am | Juthika Das
The All Assam President of Asom Xatra Mahaxabha Bhadra Krishna Goswami condemned the recent killing at Bhimajuli in Biswanath Chariali in Sonitpur District in a press meet today at the premises of...