Society is ever changing and the people like to see its reflection in any available form, be it through music, paintings, drama, film, literature etc. As we all like to see our reflection in the mirror there is no reason why we can’t appreciate and devote time for drama. Perhaps drama is the best way that can reflect our society in the best possible way, thus leaving deep impression in the mind and heart of the spectators and prompting them to ponder and introspect. Drama, though has evolved since long time has been a part and partial of our society, but in real terms it has yet to capture the imagination of our conservative society, just to talk about the Assamese society where acting especially for girls is not seen with dignity. “Only those people go for drama that are not good in academics, or have nothing else to do” observes Rajiv Kro, renowned comedian and anchor about what people in general still feels here. There is a wide spectrum that drama can open to one’s personality development and building a career of it, He adds, speaking on the occasion of First Guwahati School Drama (One act) competition, organized by Modern English School, where he teaches drama to the students. The competition was held on 4th January,in Silpagram. Manik Roy,from Sishu Natya Vidyalay, organizer of the the 2nd national children Drama festival in Guwahati, says that the festival is to bring awareness about various children problems and also promoting drama.. 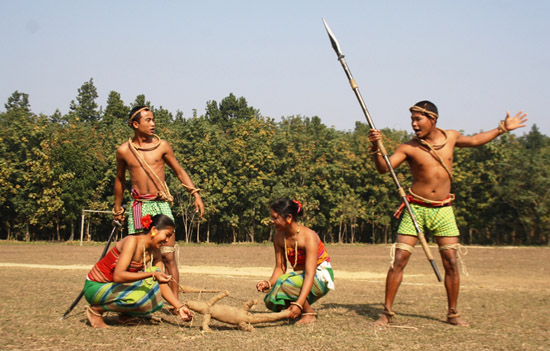 On the occasion of the Inter school Drama competition, though only five schools had participated, the competition has opened up a platform to promote drama in the schools in the long run and thus encourage the students to take it seriously along side with their studies. Principal of Modern English School, Mrs. Junali Das, advocates inducting drama in academics and feels that once the students start doing drama they will in reality understand the problems that the society is facing, be it good or bad. These sentences were much reflected on the stage when various groups of students staged their acts on very serious issues like, Child labour, education, deforestation, witch hunt. Perhaps these students would not have better understood the seriousness of these social problems through any books in the classroom than themselves getting involved in it. Besides, good acting by the students really touched the feelings of the audience which would at the same time help molding the thoughts of the young minds.

“My parents are really against doing drama, but I want to do it and did it” Said Chandrawali Goswami, who acted as a mother of a poor child working as child labour in a harsh environment. She got so involved in the acting that she had all out spoke about her parents not supporting doing drama. However this is not the only case with one or two girls, but with thousands of similar instances.Here I would just want to bring the reference of 29 year old, Rayanti Rabha, a young widow from Goalpara district, who had fought against all odds to do acting in Rampur village after her matriculation, and finally this time she has been named for prestigious Sangteet Natak Academy,s, Ustad Bismillah Khan Award. This award is being given to youngsters for their excellence in particular fields of Art. Rayanti Rabha, has recently formed her own group called “Manchelengka” means Kingfisher.She hopes to send message about injustice done to women and other social hazzards through her Drama. Hope in the long run many will be inspired by Rayanti Rabha, also that Drama teaching becomes an integral part of our academics. “All the world's a stage and most of us are desperately unrehearsed.” Seán O'Casey,Irish Dramatist.s 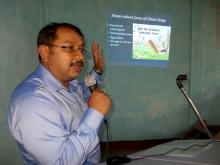 28 Mar 2013 - 3:09pm | Jayanta Kumar Das
An open discussion was held at Tangla recently on March 25 to discuss impact of climate change on rural population and the need for creating awareness among masses on the issue. The meet also... 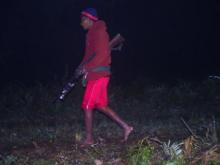 21 Feb 2009 - 5:09pm | editor
There is report of a tragic bus accident at Pathsala in Barpeta district on Saturday morning where several people are feared killed. Over 50 people, who have sustained serious injuries in the...