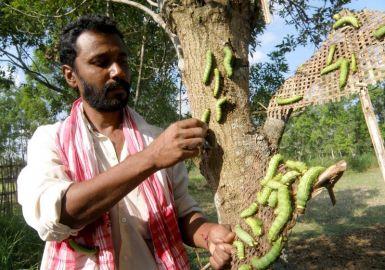 If timely measures are not taken the Muga (Antheria assamensis) heritage of Assam may face extinction in the next three decades or within 2040. The production of famous Muga silk of Assam has not been augmented. The state has a demand of more than than 5000 MT of Muga silk anually, but the state has been producing average 90 MT per year. In 2010-11 the state produced113.28 MT Muga and in 2011-12 this amount was 114.56 MT. According to Sericulture Department sources production in the year of 2013 may be same as the average production, not more.

The decline of Som and Soalo plantation areas in government sericulture farms have pushed Muga silk towards the verge of extinction, the report said. Encroachment in government Som plantation areas is one of the prime causes of decreasing food availability of Muga silk worm. There are 106 government Muga farms in Assam and most of them have no plantation and encroached. So a large area has been lost to illegal occupants and some of these occupants have allotted such lands by corrupt district commissioner and government circle revenue officers. There are 265.84 hectares of Government Sericulture Farm areas are in encroacher’s own pockets and all plantation were destroyed in these land.

Despite sincere efforts of some scientist, government officials and farmers the production of the exclusive silk of the state has not been increased due to climate change” an sericulture scientist said. Air pollution and vagaries of weather are responsible for premature death of worms. Muga is very sensitive to the odour of toxic chemicals, temperature and humidity. There are hundreds of silk rearing families in Jorhat district, especially in the Titabor region where Muga is decreasing compared to other varieties of silk. In Golaghat district few families are cultivating the tradition. Muga worms has been dying prematurely for years in these districts due to air pollution. The affected farmers blame the use of pesticides in neighbouring tea gardens.

A large number of people of various districts in Assam now have tea plantations and they use large amount of pesticides, insecticides and herbicides which are killing Muga worms. Mostly in upper Assam, mushroom growth of small tea gardens have marginalized the heritage silk cultivation and it is moving towards extinction. The excessive use of pesticides for pest and mites, mites an diseases control. Silkworm dies when they breathe toxic components mixed with air from pesticides used in tea garden nearby. Toxic pesticides like lindane, aldrin, dieldrin, dicofol, endosulfan, ethion, alphamethrin, cypermethrin, metasistox , acephate, paraquot, fenzaquin and others are being used in tea garden in Assam and silkworm has not a little resistance to smell of these mixed in the air. Climate change makes tea cultivators compelled to use excessive pesticides in their gardens. It becomes almost impossible for Assam tea to survive without the use of these chemicals because of the subtropical climatic condition in the state where the use of toxic chemicals are necessary to away with pests. But it threatens the Muga heritage . The excessive use of pesticides is happening on account of vagaries of weather attributed to climate change.

Muga worms have been dying for last two decades due to air pollution from brick factory, coke industry, cement factory and oil refineries also. Oil and and Natural Gas Commission (ONGC) has been carrying o their oil explorations near the farms with seismic survey. This process is followed to detect presence of crude with explosion. Thousands of Muga silk worms die every year due to vibration caused by the explosions. Such incidents are very common in Tinsukia, Dibrugarh, Sibsagar, Jorhat and Golaghat districts in upper Assam where oil companies like ONGC and Oil India Limited (OIL) have been carrying out oil productions for decades and the silk cultivation has been marginalized in these areas.

Climate change is effecting Muga production with flood and vagaries of weather. Sands and sediments carried by flood waters covered Som (Persea bombycina) and Soalo bushes up to three to four feet. Muga worm feeds on leaves of these trees. After the desertification and being affected by stagnant flood water Som and Soalo trees die within few months. This has been happening for years and most of Muga rearing areas are now almost free of this cultivation. At least 1500 farmers of Dhemaji districts have lost average 100 som trees due to such desertification and stagnant water. Recently almost five thousand families of the state have abandoned silk cultivation as the food is not available for silkworm, mostly Muga rearing.

On account of sufficient raw Muga yarn and lower production, people buy Tassar silk cost of which is comparatively low. The Tassar products which are not native silk of Assam have invaded into the market more than half of the Muga products in Assam. sas pure Muga. It is to be noted that three varieties of silk (Muga, Paat, Endi) are reared in Assam and Muga is an exclusive product of the state Pure Muga is now rare and Tassar silk mixed with Muga is being sold in the name of Muga. So the adulterated silk is replacing Muga gradually as its production cannot meet with customer’s demand according to Krishnakanta Chetia,  Assistant Director of Government Sericulture Department. He said that production of Muga cannot be raised in erratic environments and changing climate and is likely to face extinction in the decades to come.

Muga, the unique golden-yellow silk of Assam was granted the Geographical Indication (GI) registration in 2007. It is the first item from the state to obtain the GI tag. To save the Muga heritage it will need a comprehensive effort covering common people and everybody will have to work toward improving the general environment. Muga needs special measures to survive climate change else Assam will lose a part of its rich traditional heritage.

Assaam is the only state in

Permalink Submitted by P.Balasundaram on Sat, 12/01/2013 - 16:55
Assaam is the only state in the world which produces the most valuble silk .Assam Govt should take all necessary steps other wise we will be loosing the most valuble genetic material.. available only in India

Its true that the muga raw

Permalink Submitted by Dr.P.jayaprakash on Tue, 12/02/2013 - 00:18
Its true that the muga raw silk production is ossilating around 100 mt annually,rather it is stagnant.the reasons elobarated are real happenings in field.There is severe competation from rubber and tea gardens.To some extent we can face the challenge by introducing the muga silkworm rearing in neighbouring sister states like some parts of Meghalaya mizoram and Nagaland   where the abiotic factors such as temparature rainfall are congenial for theseed crops.the trails conducted so far by msso are successful.the government of Assom has to take initiative in organizing inter state meeting to explore the favourble seasons in other N.E states for muga and a stratagic road map has to be prepared in mission mode.other wise as pointed out in the article we have to show only muga silk and muga silk moth photographs to our people in the days to come

6 Jun 2012 - 6:10pm | editor
World Environment day has been observed by People's Friend Foundation at the District Library Auditorium, Guwahati. On this occasion, Enviro Quiz was organized among school students of the state in...

13 Jun 2007 - 5:30am | editor
Guwahati : The Assam United Democratic Front has distanced itself from its MLA Rasul Haque Bahadur who had demanded creation of an autonomous council for the minorities of Golapara, Barpeta, Dhubri...

BJP popularity on the decline: CM

7 Jul 2014 - 10:38pm | AT News
Chief Minister Tarun Gogoi on Monday said that BJP’s popularity is declining rapidly. Talking to reporters in New Delhi, Gogoi said that if this downward trend continues, it would be difficult for...