The All India United Democratic Front (AIUDF) will fight it alone in the upcoming Lok Sabha polls.
This was what party president Badaruddin Ajmal told reporters in Guwahati after he held a close door meeting on Tuesday. The party is set to field candidates in 8 seats this time.
Party sources told assamtimes that they are in touch with BJP and AGP to help their candidate win the Rajya Sabbha polls slated for February 7.

15 May 2017 - 10:58am | AT News
Delhi and NCR are still unsafe for the north eastern women if Sunday’s incident is any indication. A gang of three miscreants taped a Sikkimese woman inside a moving vehicle where she was forcibly...

4 Apr 2012 - 5:10am | Ritupallab Saikia
Five car lifters including two women were arrested by Bokakhat Police at Rajabari on NH-37 last night and a Winger (AS-13/C-2429)had been recovered from them. It has been reported that the gang of... 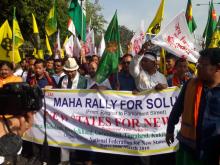 Bodos hit the streets in Delhi

19 Mar 2018 - 11:36am | AT News
NEW DELHI: Hundreds of people from BTAD areas hit the streets in New Delhi on Monday reiterating the separate  Bodoland demand. The All Bodo Students Union organized the procession where nearly...