After years of will-it-won’t-it, the Assam government is all set to appoint police commissioner for Guwahati.

The announcement echoes from Governor JB Patnaik’s speech after unfurling the national flag at the Veterinary Playground in Khanapara.

Patnaik said that the commissionerate would be set up soon to firmly deal with the rising crime graph in the city.

The government assured the Guwahatians of the police commissionerate in the wake of the 2007 serial blast. But the process got delayed.

Chief minister Tarun Gogoi a few months back said that the police commissioner would be appointed after the Republic Day. 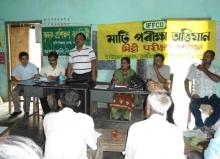 23 Jun 2011 - 9:37pm | tpsaikia
The Krishi Vigyan Kendra (KVK), Nagaon in collaboration with IFFCO organized an awareness programme on Soil Testing on the 23rd June, 2011 at Bhelai Deuri village of Nonoi, Nagaon for the...

16 Mar 2016 - 2:38pm | Hantigiri Narzary
The Election Observer for Expenditure for 31-Sidli (ST) LAC Jaginder Singh, IRS on Tuesday arrived at Kajalgaon in Chirang district. He held a meeting with the officer in charges and members of...