After months of will-they-won’t-they, Sootea AGP in rank and file quit the party on Sunday.

The formal announcement was made at a meeting in Sootea presided over by MLA Padma Hazarika. The suspended legislator, however, did not formally resigned because of some legal implications.

The party workers told Assam Times that they were disappointed with the party leadership and that they had hardly any option to buy time.

Notably, the party leadership on Saturday invited Hazarika and his supporters to formally withdraw his suspension. But Hazarika did not turn up citing personal reasons.

He was suspended for 6 years     for refusing to toe on the party line in the recent Rajya Sabha polls, where his vote was believed to have cancelled.

9 Mar 2014 - 9:29pm | AT News
KMSS workers from the far flung areas have thronged Guwahati on Sunday to hold a huge gathering on Monday to demand release Akhil Gogoi.Thousands of people have already arrived in the city on Sunday... 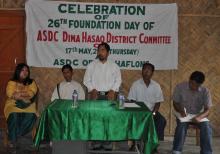 19 Aug 2015 - 7:50am | AT News
Defying an inclement weather more than 2 lakh voters in Nagaon and Morigaon are exercising their franchise to decide on the fate of 119 candidates who are contesting in the Tiwa autonomous council...