Yet another incident of witch hunting sends shockwaves across the state where a national level athlete was not spared. The incident took place on Thursday wee hours in a remote hamlet in Karbi Anglong district.

The victim is medal winner in javelin at several national meets Debajani Bora, whom the villagers tied to at post a local prayer hall and mercilessly beaten up by a group of villagers in full view of her family members alleging that she had a witch creating trouble in the entire village.

The villagers inflicted torture on her at the instance of the prayer hall caretaker Radha Laskar whom police arrested on Thursday afternoon. Her family members took her unconscious to the Dokomoka Primary Health Centre for treatment of head and neck injuries.

Search is on to nab the other perpetrators. Despite selection Debojani, a mother of three children, could not represent the country at an international meet at Malaysia in 2011-12 due to financial constraints.

6 Nov 2012 - 3:59am | editor
Chief Minister Tarun Gogoi on Monday said that Bhupen Hazarika's music will keep living as long as the mighty Brahmaputra flows. In a brief address at a function in Latasheel playground organize to... 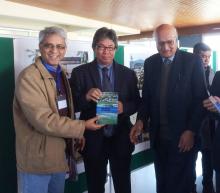 25 Nov 2016 - 8:30pm | CM Paul
A major study on displacement of peoples in Sikkim was released at a 3-day International Seminar on “North East: Peoples, Power and Perspectives” held at Sikkim Central University, Tadong.At the...

8 Aug 2012 - 3:36am | editor
Assam chief minister Tarun Gogoi said on Tuesday that CBI will probe into the group clash in Kokrajhar, Chirang and Dhubri districts where death toll has gone upto 73. Addressing a press conference...