The Gauhati High Court has allowed prominent cardiac surgeon Dr Dhaniram Baruah to proceed with his research works which was barred by the state health minister Dr Himanta Biswa Sarma.

According to information, hearing a writ petition on Wednesday a bench of the court said the health department's order imposing restrictions on Dr Baruah was one sided.

It may be noted that addressing a recent press conference in the city, the minister threatened to arrest Dr Baruah if he fails to stop his research in the form of administering vaccine to to the human body. But Dr Baruah opined that he had already received permission in 2005 by the same department.

Permalink Submitted by rcdohare on Wed, 15/10/2008 - 18:18
hello, such minister who try to impose sanctions against such experiment are criminal of scientific progress mankind welfare.

Permalink Submitted by A concerned hum... on Mon, 13/07/2009 - 08:21
It is not certain if Dhaniram Baruah has any knowledge of cancer research and treatment. I happened to meet and interact with the families of certain cancer patients who had sought treatment from him in a desperate endeavour to save their loved ones but it proved to be further detrimental to the lives of the patients. Today those families have nothing but regret, they say. They state that there is no clarity as to what 'medicine' Dr Baruah administers. His institute is in the middle of a forest and travel to the city Guwahati) is very difficult. There are no trained nurses and the local village boys/girls inject the patients intravenously!!! At the start when talks are on regarding admitting patients, the Dr and his assistant are extremely polite, appear very concerned, keep calling and enquiring about the health of the patient. However, once you are at the clinic, have done the payment and have admitted the patient, the behavior gradually changes. In fact when the patients complain of certain new symptoms, the Dr clearly states ' we don’t treat those'. Well if you don’t or cannot, for whatever reason, why do you ask for the patients to be brought to you in the 1st place. The charges are very high and the quality of the treatment and related facilities are substandard. There are 400 stray dogs in the ram shackled campus. These dogs, as the doctor claims, are extremely significant for his research efforts. Sources say that he appears confused and unsure about symptoms that develop in terminal patients. Subsequently he becomes thoroughly insensitive to the needs of such patients. None of the patients/ relatives can go to him claiming any compensation or file any compliant against him, as he ensures that documents are signed at the start as well as the time of leaving the institute disclaiming him from any responsibility . No doubt, patients come to him for treatment- and a lot of cancer patients too- but this appears to be more out of a mixture of hope and despair( as in the case of the families that have spoken to me) There is no properly and thoroughly documented case regarding a successful treatment procedure. No patient reports have ever been shared with families. Dr Dhaniram Baruah may have been a very good heart surgeon and his contribution to the field of cardiac surgery may be immense, however, that is where it ends. As far as cancer is concerned there is no clarity or transparency about his treatment process. Unless he is able to clearly display the properties of the medication he uses and prove their effectiveness, he should not be encouraging patients to come to him for treatment.

Crisis over: Youths back to B’lore

22 Aug 2012 - 9:21am | editor
Hundreds of Northeast people are back to the southern cities to resume work a few days after they got the real story of rumour. Three special trains have been deployed in Guwahati for Bangalore to... 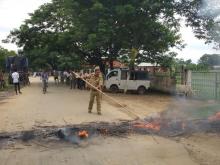 Firing at Rongajan; One crushed to death

19 Aug 2014 - 9:39pm | Bibeka Dutta
One person was died and at least ten others sustained serious injury when police sprang upon a group of people in Golaghat district on Tuesday who took to the streets in protest against the Naga...

14 Jan 2009 - 10:02pm | editor
Assam Association, Delhi is going to celebrate the Bhogali Bihu Festival as per the following day-long programme on Sunday, 18th January, 2009. We solicit your benign presence alongwith your family...