A hardcore ULFA (I) militant surrendered before police in Dibrugarh district with sophisticated arms and ammunition on Friday.

Identified as ULFA(I) Raktim Moran,  the ULFA-I lance corporal is a resident of Mudai Gaon in the same district who deposited one AK-81 rifle, one Chinese grenade, three magazines and 79 rounds of ammunition.

Moran joined the outfit three years ago before undergoing arms training in Myanmar. Paresh Baruah is believed to have sent him last month to carry out sabotage work. 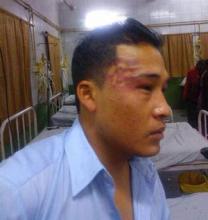 23 Jun 2009 - 4:26pm | Daya Nath Singh
The formation of a Congress-led government in Mizoram has brought a number of problems for the people of the neighboring state of Assam. The Bhuvan Pahar, one of the most holy places in Barak...

On the Climate Trail

8 Aug 2012 - 1:16pm | Mubina Akhtar
The recent waves of floods have left a trail of devastation in the entire Brahmaputra valley. More than a week of heavy rains in Assam has caused the massive Brahmaputra to exceed dangerous levels....