Senior journalist Samudragupta Kashyap will receive Dr Bhupen Hazarika award for 2015 on Saturday. Former Union home minister Sushilkmar Shinde will give away the award to the veteran north eastern journalist at function in Pune which comprises Rs 51,000 in cash along with a citation. The award aims at strengthening bonhomie of Maharashtra with the north eastern region. 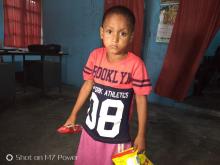 25 Jul 2019 - 10:20pm | AT Kokrajhar Bureau
KOKRAJHAR: A five year old minor male boy was found at Kokrajhar railway station in Kokrajhar.The boy was today produced before the  child welfare committee(CWC) Kokrajhar and has sent to child...