Kokrajhar: BTAD chief Hagrama Mohilary reviewed the development works and implementation of the various schemes meant for Chirang district at a meeting in Kajalgaon on Friday..

Mohilary asked the officers to ensure proper and timely implementation of the schemes and that the  district wise meetings  would keep an eye on the functioning of the departmental heads in the district levels.

"The primary objectives of the discussion is to bring visible changes in terms of development in all the district of BTC area,” he added.

He further said that the meeting reviewed and examined the problems and grievances of the government departments as to have inclusive development in the district.

Taking serious note on various programmes of the departments in implementing various projects, Mohilary directed the departmental heads to complete the works properly and to cancell all the schemes taken till 2016 which were not started yet.

Accordingly, he instructed education department to take steps for appointment of teachers and staff against vacant posts, Health department to run the JSB Civil Hospital smoothly addressing its problems immediately.

Agriculture department to encourage the cultivators for taking interest on organic farming and to distribute the seeds among  farmers timely.

It may be mentioned here that a review meeting will also hold in Baksa district on April 10 in the conference hall of the District Centre at Mushalpur. 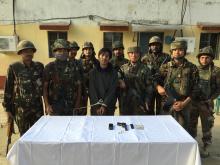 16 Jan 2018 - 8:44pm | AT News
MARGHERITA: Despite a stepped up counter insurgency operations a section of Naga rebels has been unleashing terror along in the form of extortion along the Assam-Arunachal Pradesh border. The Assam...

27 Jul 2011 - 10:01pm | editor
The killer malaria and encephalitis seems to have taken an epidemic turn claiming more than 50 lives during the last 3 months. In Sivasagar district alone altogether 35 people died of Japanese...

IS, school principal suspended in Jorhat

7 Mar 2016 - 3:50pm | AT News
Stunned by the Jorhat incident the authorities have suspended inspector of school, Sankardev Seminary HS School principal. SEBA secretary Kamaljyoti Gogoi has also received a show cause notice in...