Addressing a mammoth rally in Guwahati on Sunday the partyÃ¢â‚¬â„¢s he said need of the hour is a non BJP and non Congress force to make an end to the current situation.

In his address, the CPM general secretary warned the UPA government of dire consequences if it fails to halt the bill for foreign investment in the countryÃ¢â‚¬â„¢s banking and insurance sector. He said communal forces like BJP and RSS canÃ¢â‚¬â„¢t fight terrorism.

Karat further said the party was trying its best to work out a non Congress and non BJP front before the Lok Sabha poll saying it is right time for the country to get an alternative front. The veterans include West Bengal Left Front chairman Biman Basu, CPM general secretary Prakash Karat along with several other senior leaders in the state. Including Urdhav Barman, Hemen Das, Ananta Deka.

Permalink Submitted by Mussaffer M N on Mon, 27/04/2009 - 12:45
Sir, The communist party is the party of poor. The communist ideology reveals that all and sundry should be treated equal. When the poor were devoid of rights it is the communist party which was able to restore the rights to them. India will now witness the empowerment of the third front!

North East: Where Insurgency is a Cottage Industry 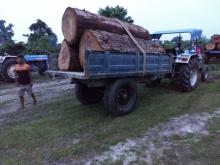