Assam Governor PB Acharya on Monday joined the war of wards against chief minister Tarun Gogoi a week after his alleged political consultation with a BJP delegation triggered no less controversy.

Talking to reporters in the sidelines of a function at the Raj Bhawan, Acharya said that he had no political discussion with the BJP delegation that triggers so much controversy. Without naming Gogoi, the governor said somebody is confused with the imminent lose of power.

Gogoi along with Congress, AGP have been taking on Acharya for his alleged political consultation with BJP leaders and MPs at the Raj Bhawan. 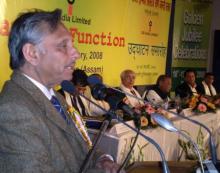 19 Feb 2008 - 1:40am | editor
The Centre is all set to start oil exploration in the Brahmaputra river basin saying it could boost oil production. Addressing the golden jubilee function of Oil India Limited (OIL) here on Monday,...

30 Oct 2016 - 5:41pm | AT Kokrajhar Bureau
:A hardcore cadre of NDFB(Songbijit faction) was killed at an encounter with police at Champa bazar area in Chirang district late last night. According to Dr LR Bishnoi,ADGP(BTAD), police conducted...

16 Sep 2017 - 11:18pm | AT News
The police probing the public comment against Jiten Dutta  have withdrawn the case on Saturday after the former ULFA rebel personally appeared before them with a note of clarification...