Woes of waters for wild animals

Flood waters have been wreaking no less havoc for the birds and animals in national parks and sanctuaries. Rhinos along with wild animals have shifted to the near by hill in the Kaziranga National Park which is completely submerged. Many deer are believed to have been washed away. Elephants tigers and buffalos have been sneaking into the human habitats to get rid of the calamity. Most of them been crossing the National Highway No 37 in broad day light.

Same scene prevails in the Manas National Park which has come under the surging waters after the strong current of the river breached an embankment. Wild animals, mostly, have been shifting to the high spots.

The wild animals in the famed Pobitora Wildlife Sanctuary, which has been completely submerged have been deserting their habitats.

Forest minister Pramila Rani Brahma has been reviewing the situation with top ranked forest officials on every passing day. She has strictly has the department to firmly deal with the eventuality to ensure safety and security of the wild animals. 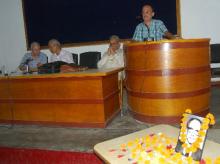 12 Mar 2013 - 11:30pm | Kawal Deep Kour
A Capacity Building Legal Training Programme ‘Hunting the Hunters’ for the benefit of the staff of Assam State Forest Department was organised by Tiger Trust from 8-10 March, 2013 at Don Bosco...