TINSUKIA:Hundreds of bikers took out a huge rally in Tinsukia on Saturday opposing the Centre's conspiracy to include parts of Assam in the much-hyped Nagalim to appease the poll bound Naga people.

Organized by the district AASU, the rally drew no less response from the people in the town where the biking protesters shouted slogans warning the BJP-led governments' in Delhi and Dispur not to proceed further.

They further reiterated stiff resistance to the move to grant citizenship to the Hindu Bangladeshi immigrants by amending The Citizens Act,1955.

District AASU leaders Binoy Dubey and Samarjyoti Gohain said they would further mount pressure on the Centre not to ensure passage of The Citizenship Amendment Bill, 2016 in Parliament which will put the identity of the Assamese as a nation at stake

22 Oct 2016 - 9:31pm | AT Kokrajhar Bureau
Allegation has been lodged with Superintendent of Kokrajhar RNB Civil Hospital against serving nurses along the hospital for mishandled of a pregnant woman during delivery hour inside OT room which... 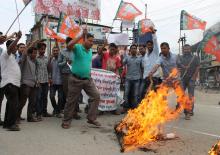 5 May 2015 - 8:17am | AT News
After months of intense debate and controversy, BJP has cleared the decks for the Indo-Bangla land swap deal in its original format triggering a massive protest across the state. State BJP leaders...

29 Sep 2010 - 1:43pm | editor
Assam sounds red alert in view of the much awaited verdict on the Ayodhya by the Allahabad High Court on Friday. Security forces are taking their positions across the state apprehending any...
Follow @Assam Times