Assam : Media Persons Ask Their Due

Media persons of Assam have to perform their duties under tremendous work pressure but with low return in terms of salary and other legitimate facilities. The trouble torn region has witnessed a media boom in the last decade but the media persons, including the journalists, continued to be the victim of exploitation by their respective proprietors.

The journalists, who remained vocal against the exploitation faced by the employees in other sectors, work without any job security as most of them do not have proper appointment letters. They are denied their due economic benefits recommended by the statutory wage boards and labour laws of the country. The insurance coverage to the media persons in the region is also deplorable.

Understanding the importance of insurance for the media persons, a pioneer pressmen's organisation of Assam has taken a significant initiative. Guwahati Press Club, a forum for the working journalists in the prehistoric city, has appealed the media group owners of the state to provide health and life insurance coverage to their employees. In a formal letter, disbursed on January 9, the press club argued that such a benefit would encourage the employees, including the journalists, to work with more commitment and dedication. "We observed that not more than 10 per cent of journalists and media persons in Assam are being entitled for the benefit of health and life insurance coverage," the letter to the media groups said adding that they were 'fully aware of the importance of such insurance benefits to media persons in the present socio-political context' of the region. The letter also informed that if for any reason, the managements were not ready to take the initiative immediately, they might join supporting such an attempt to be taken by Guwahati Press Club in the coming days.

Here it would be worth mentioning that Guwahati, the virtual capital of Northeast, witnesses the publication of more than 20 morning dailies, half of those in the Assamese language. Seven of these are published from more than one centre, whereas three Assamese dailies claim to enjoy around a circulation of one lakh. Lately, three satellite television news channels have emerged from the city, adding hundred more working journalists to the team of sentinels.

Both the print and visual media have created 8,000 direct jobs and provided indirect employment to 20,000 throughout the state with a population of 26 million. There are over 500 working journalists in the city, most of whom are associated with Guwahati Press Club. Christian missionaries initiated journalism in Assam in 1845, with the launch of 'Arunodoi'. Till 1979, the print media in Assam was merely another facet of social work. Two pioneers of Assam, namely RG Barua and Deveswar Sharma, published the dailies 'Assam Tribune', Dainik Asom' and 'Dainik Janambhumi' till the70s.

The historic Assam agitation in the 1980s' changed the social life and living of the Assamese community, which resulted in many new values confronting the local people. Amidst all the turmoil and social chaos, the local media witnessed a rapid boom in the 90s.

Though the print media boom is spectacular, there are people, who are apprehensive about the outcome. "We are witnessing the boom since early 90s but quality journalism remains elusive in our region. I agree the local media is facing a tough challenge from both national newspapers as well as the electronic media. But still, there is room for regional newspapers to play a constructive role in socio-economic growth in this part of India. Unfortunately, the existing dailies have failed to make any mark in this respect," says Prakash Mahanta, the general secretary of Journalists' Action Committee, Assam, a mediamen's rights body.

However DN Singh, a Guwahati-based journalist, makes a different point, "Journalists here have to work under tremendous pressure from the managements. As we do not have different beats in reporting, journalists have to cover all the important issues including political, economical, social and cultural. So it is quite impossible for a journalist to juggle so many assignments."

The ongoing insurgency and unrest among the youth of this region have put tremendous challenges to the working journalists based in Northeast. They are subjected to numerous threats from insurgents, surrendered militants and even the security personnel from time to time. The statistics reveal that the trouble torn region has lost over 20 dedicated editor-journalists in last two decades.

"You can find more than 70 per cent newspaper employees in Assam are deprived of basic minimum facilities such as appointment letter, leave, provident fund, ESI etc," says Rupam Baruah, the president of Journalists' Forum, Assam. He also added, "They are emotionally exploited by the management and subjected to no job security. There is no other way than fighting for our dues as recommended by the statutory wage board." 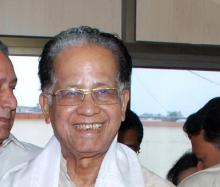 1 Apr 2015 - 8:35pm | AT News
Dispur pins hopes on uninterrupted financial assistance from the Centre without any change in the system of the pattern.In his letter to Narendra Modi, Chief Minister Tarun Gogoi urged to continue...

11 Jan 2017 - 12:18am | Syed Miraz Ahmed
In a bid to free the footpaths of the city from rampant encroachment by vendors and shopkeepers, the Guwahati Municipal Corporation recently initiated an awareness campaign to sensitise the people....