Normal life was totally paralysed during the 60-hour 'Dima Hasao bandh' called by North Cachar Hills Indigenous Students' Forum demanding bifurcation of the district, Monday, officials said. The bandh began at 5 AM today and is scheduled to end on May 19.

There was no report of any law and order situation create during the bandh reported from any other parts of the district.

More than 70 people killed and hundreds of villages burnt during the clash between Dimasas and zeme nagas in last year in different parts of the district.

PCG will stay to broker peace process with govt: Rajkhowa

6 Jul 2008 - 4:04pm | editor
The United Liberation Front of Asom (ULFA) says it will not dissolve the Peoples’ Consultative Group it formed to broker peace process with the government .But in the same breath it says it...

13 Oct 2015 - 7:22am | AT News Itanagar
Much to the respite of Nabam Tuki, the Supreme Court on Monday refused to clear a Gauhati High Court’s order for CBI probe into a 10 year old allegation against the Chief Minister. The apex court,... 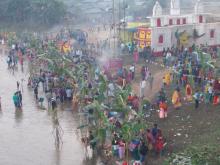 21 Nov 2012 - 12:16am | editor
Thousands of devotees offered prayers to the Sun God on the bank of Dudhnoi river on Tuesday on the occasion of Chhath puja. Bidyut Sarkar